The strange summer that launched me into technical design 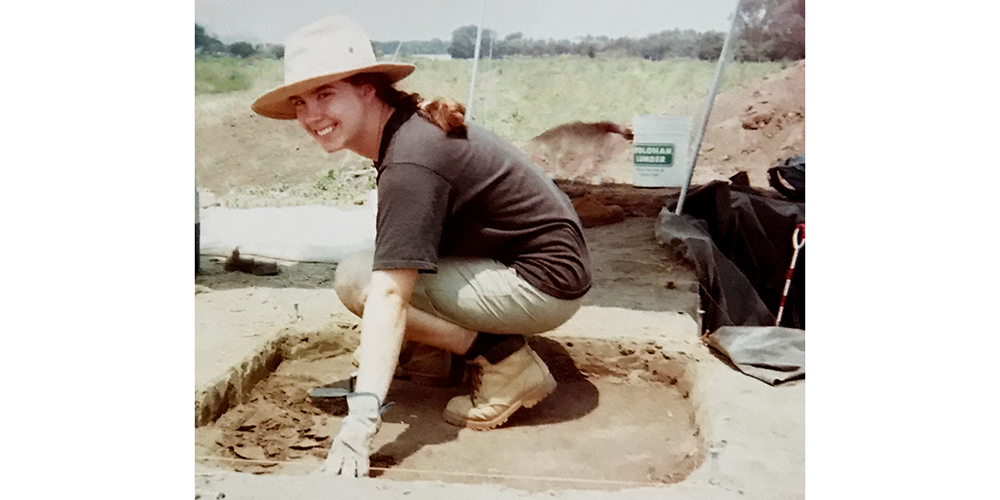 A few weeks ago, I received an email from my undergrad professor, Dr. Mary Beth Trubitt, announcing she had finalized a project that I had been involved with as a student at Northwestern during 1997–1998. The project: excavate a fallow field that bordered the Cahokia Mounds State Historic Site.

Yes, I’m talking about archeology. So why is this academic discipline popping up in a blog about design? Don’t worry, I’ll get to that.

What is Cahokia Mounds?

Do you know about Cahokia Mounds? I’ve found that most people I talk to have never heard of it (granted, my circle is mostly comprised of designers, programmers, and marketers). And yet, I encourage everyone to try and make it to Cahokia at least once in their life. If you’ve never heard of this place, you’ll be stunned.

What is known today as Cahokia Mounds is the remains of an ancient city built by the Mississippian culture in southern Illinois, across the river from St. Louis, MO. The city started taking off around 900 C.E., and by the 12th century had a population nearing 20,000. As the site’s website states, that figure is higher than the population of London at the time.

You read that correctly. This is a North American city. A huge city by European medieval standards. And it has pyramids, too—its tallest is Monk’s Mound, a huge earthen pyramid-shaped mound that is around 100 feet tall. And Cahokia has henges (you know Stonehenge? same idea)! The Cahokian henges were made of wood instead of stone, so they’ve been recreated so visitors can enjoy them in all their glory.

What is available to visitors has been uncovered and researched in detail by dedicated students, underpaid scientists, and volunteers, through Illinois’ brutally hot summers and stupidly cold winters.

The summer of 1997 was hot, humid, and disgusting. I remember one morning we arrived on site and Dr. Trubitt announced the heat index for the day would be 112 degrees Fahrenheit. The sweat mixed with the dirt on our arms and legs and turned to mud as we dug and cleared our perfect one meter by one meter pits, using our bare hands to remove dead worms and flattened frogs that had wandered into the site over night.

Everyone could tell that I did not belong. Even as I look back on photos of our crew, I stand out in my artist’s black while everyone else looks like, well, an archeologist. I had had my doubts about becoming an archeologist before I enrolled in the field school, but I knew the experience of digging up a field in southern Illinois for two months would really help me understand if this was what I wanted to do with my life. And, from the moment I arrived on site, I realized this was not the path for me.

A respite from the shovel in the form of a pencil

Somewhere in the second or third week on the dig, I started doodling during our evening meal, and the others took notice. Dr. Trubitt suggested I draw some of our findings. I complied.

Then someone on our team found a really, really cool arrowhead (it had probably been a Cahokia family heirloom or something traded into the city, because it was unlike other blade tips typical of this time and place). I drew the arrowhead. Next, we found some potsherds, and I drew those as well.

I kept drawing, learning, making mistakes, and drawing some more. Dr. Trubitt directed each drawing, showing me where I needed to make improvements, and training me on the drawing standards I needed to follow. I think this was the first time I understood the nature of technical illustration, its power, and its value. At first I was appalled that the drawings needed to be defined enough to be photocopied, but as I learned more and more about how these findings were shared and published, it all started to make sense.

The drawing continued, well into the cold winter months.

After the summer was over and we returned to campus, I took a lab with Dr. Trubitt. And drew some more.

I remember that classroom well—the walls brimmed with artifacts and bones and dust. When my friends visited me as I drew, they expressed how jealous they were of my major because none of their classrooms looked nearly as interesting.

Launching into an illustrative career

While I did complete my Anthropology degree, I did not go on to get my PhD and become a professional archeologist like many of the others on that dig. I went for my MFA and became a graphic designer instead. But, at some point while in art school, an attorney approached me, asking if I could do some technical illustration for one of his IP clients. I pulled out those dusty drawings I had done for the Cahokia dig to show him, and like that, I had a job. A very, very cool job. I guess archeology pays after all.

I enjoyed receiving the email from Dr. Trubitt last month, but I also felt humbled. The project we had worked on over twenty years ago had just been completed. Finally. Quite an eye-opener into the time archeological research takes, and the funding needed to complete it.

Dr. Trubitt included the article published in Illinois Archaeology Survey, and to my absolute delight, my drawings are published along with her writing. And, to my continued delight, those drawings still look good. I guess she taught me well.